In the strange modern automotive world, everybody is producing SUVs. It is simply a trend among the people nowadays who demand this kind of vehicle. Whether it’s due to their practicality, off-road capabilities, or something else, it is certainly a trend that is going to stick with us for years to come.

Some of the brands recognized this very early, and they already banked on it.

Others caught up later in the game but managed to get some of the action. However, there are some brands in the automotive world from which we would never expect such a move.

One of them, for example, is the Lamborghini. But, even this famous Italian brand made an SUV which turned out to be quite successful.

There was one brand though which managed to stay true to themselves, at least until recently. That brand is Ferrari. In the end, they succumbed, and they made their SUV. It is called the Purosangue, and today we are bringing you the first leaked photos of the serial version.

As you can see from these low-quality photos, it does somewhat follow the design language of the brand. It is sleek yet moderately aggressive, but judging by the leaked images it does leave something to be desired. While the front of the car looks modern and somewhat appealing, the side view reveals an undefined line that doesn’t follow the rest of the design. 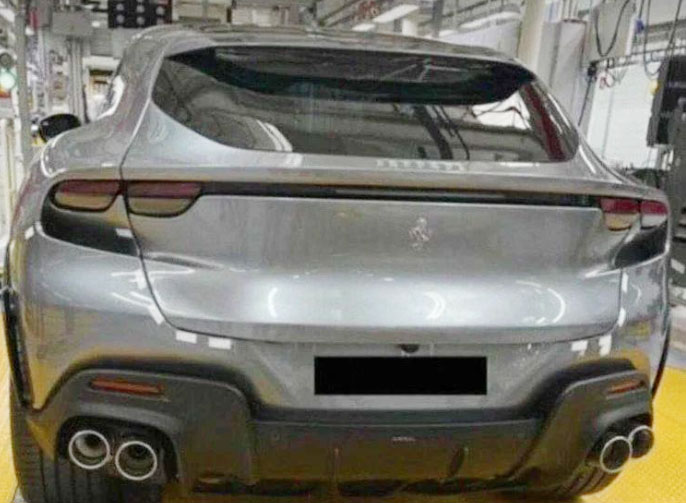 The rear of the car looks nice and sporty, and we can see the 4 exhaust pipes, which tell a tale of the potential monster under the hood. Possible candidates for primary powertrain options are V8 with an ERS (energy recovery system), similar to one in F1, which would have an additional boost from an electric motor.

Ferrari could also equip it with V12, but there are slim chances for that when we consider the strict emission regulations. Lastly, it could come with a potent V6 which could come as a plug-in hybrid. Whatever the case is, Ferrari Purosangue will be welcomed by many. However, we can’t shake off the feeling that this Italian brand simply shouldn’t produce SUVs.