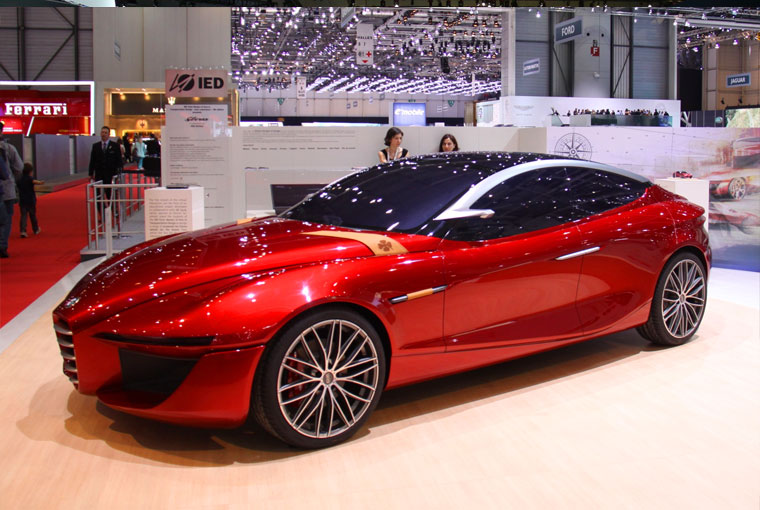 Alfa Romeo is going to present another gorgeous concept at Geneva Auto Show this year called Gloria. This new concept is a result of cooperation between Alfa Romeo and European Design Institute from Italy, Torino. Even though it’s going to be presented in Europe, this model is designed to attract buyers from North America and Asia.

“We asked students to give us their interpretation of the Alfa Romeo saloon and we discussed all of their projects to get most out of their spontaneous creativity” said Lorenzo Ramaciotti, the boss of Fiats design team. This car is 470 cm long, 192 cm wide and 132 cm high, and it has almost identical dimensions as Audi A5 Sportback, which could mean that it’s going to be Alfa’s answer for cars in this segment.

It is still unknown which engines they’re going to use, but Alfa’s officials announced that they designed this car to be fitted with modern V6 and V8 biturbo engines like the ones used in new Maserati Quattroporte. The stronger 3.8 l V8 twin turbo engine develops 523 HP pushing the huge Quattroporte to 100 km/h in 4.7 seconds, while the top speed is 307 km/h. The twin turbo V6 engine is going to develop 404 HP.

We have to consider the fact that the new Alfa Romeo Gloria is going to be a lot smaller that the Quattroporte meaning that it’s going to be a lot faster and more agile. As we can see this car is an example of design excellence. It is a reflection of Italian style mixed with modern design and sport performance representing everything Alfa Romeo is about. It is probably one more Alfa Romeo concept car that will go into production in near future. We expect to get more info about Alfa Romeo Gloria on next Geneva Auto Show.