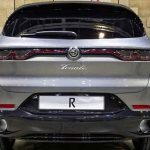 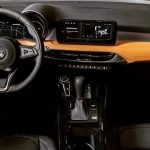 In our recent article focusing on Alfa Romeo 2020 models, we’ve discussed the production of the latest baby SUV. There are still a lot of unknowns regarding the Alfa Romeo Tonale production version, as we have a lot of misinformation coming from different automotive portals and Italian car forums.

However, we finally have some solid information revealed in the form of spy photos. While they might not appeal to some of the true Alfisti, this might be a new company savior. Newly-released photos look like they came from the testing facility, as we can see different competitors’ models like Audi Q3, Volvo XC40, BMW X2, Nissan Qashqai and Range Rover Evoque in the background. However, since Tonale is still in pre-production, we might see some slight changes when it comes to exterior design.

The rest of it is unnoticeably tamed, and it retained design elements envisioned in the concept car. It is fitted with regular door handles, mirrors, etc., while some of the details like hidden rear door handles that came from the concept stayed.

The interior brings us the biggest change. Futuristic and minimalist design is replaced with a more practical comfortable interior characteristic of Alfa. Although the interior has lost some flow, it is still stylish and sporty. Floating infotainment screen differs from previous Alfa models and it looks a bit more generic. But the photo itself doesn’t look 100 percent genuine, and it could be someone’s Photoshop attempt.

For maximum performance Alfa might use 510 horsepower engine Stelvio Quadrifoglio, however, there is a possibility that we might see the different configuration. Tonale is going to be the first car with a hybrid powertrain that this company created, and it could come in any form. Electric motor, in this case, could be paired with any of the gasoline engines from their engine palette.

This means that for the first time we could see something like dual power mode added to advanced efficiency, natural mode, drive mode, etc. On the other hand, since Alfa Romeo Tonale production version is based on front-wheel-drive Jeep Renegade, it might give them a limited number of possibilities.

As an Alfisti, we all would’ve liked it if the Tonale was based on the Giorgio platform. However, that would’ve increased the sale price significantly. So in the best interest of Alfa, we all have to support this decision. While it might not have the sporty spirit as the rest of the Alfa’s, this small SUV might give the company a much-needed boost in sales.

The same goes for design as well. When it was revealed on the Geneva Motor Show, Tonale in concept form took our breath away. As car enthusiasts, we want to see cars pushed to the limit, but that might not appeal to everyone. That’s why a more conservative design in the compact SUV segment might yield better results.

As a plug-in hybrid Tonale might appeal to even wider audiences, but, only if Alfa manages to shake off some of the bad rep from the past. Whatever the case is, Alfa Romeo Tonale production version is a car that’s going to make or break this newly-rejuvenated company. While Giulia and Stelvio are magnificent cars, people didn’t relate to it, mainly because of the cost.

That’s why Tonale must be competitive when it comes to price. Only then, Alfa is going to get back on its feet when it comes to profits. Premium quality and sportiness must stay, while price, regardless of profits, has to be low.